We all have heard the term ‘BitCoin’ and although most are not familiar with its working, what you might be imagining is Bitcoin is some sort of payment mechanism. Well, you are *not* wrong, but BitCoin is much more than just a payment tool.

So what exactly makes BitCoin unique and how does it work. Let’s find that out 🙂

Quoting with reference to the Book ‘Mastering BitCoin’ by Andreas M, Bitcoin is collection of concepts and technologies that form the basis of a digital money ecosystem. It includes a currency, with units called bitcoins, that are used to store and transmit value among participants in the bitcoin network.

So, in order for a person to get / transfer Bitcoins, he should have a BitCoin Wallet first. So to join the BitCoin network and start using the currency, the person has to either download an application or use a web application. Because BitCoin is a standard, there are many implementations of the BitCoin client software.

The three main forms of BitCoin clients are:

A full client  keeps the entire history of BitCoin transactions (every transaction by every user, ever), manages the users’ wallets, and can initiate transactions directly on the BitCoin network. This is similar to a standalone email server, in that it handles all aspects of the protocol without relying on any other servers or third-party services.

A lightweight client stores the user’s wallet but relies on third-party–owned servers for access to the BitCoin transactions and network. The light client does not store a full copy of all transactions and therefore must trust the third-party servers for transaction validation. This is similar to a standalone email client (Outlook) that connects to a mail server for access to a mailbox, in that it relies on a third party for interactions with the network.

Web clients are accessed through a web browser and store the user’s wallet on a server owned by a third party. This is similar to webmail in that it relies entirely on a third-party server. 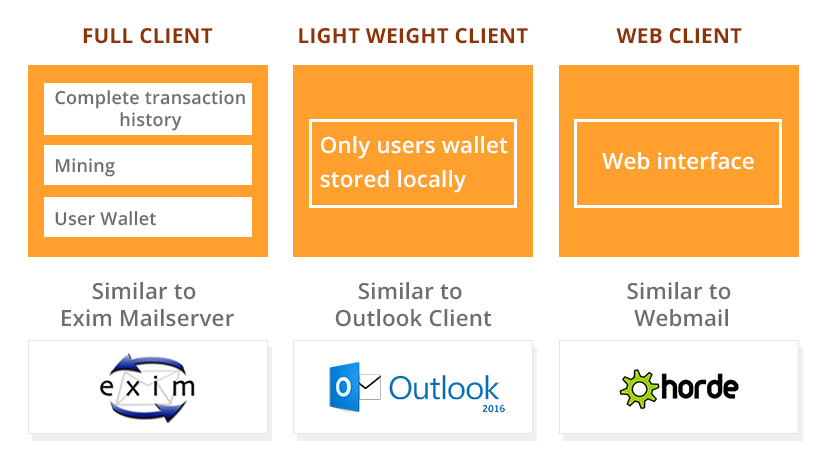 So, how does a user get BitCoins? Well, it is not possible to buy BitCoins at a bank or foreign exchange. Not as of now, anyway.

BitCoin users communicate with each other using the BitCoin protocol, primarily via the Internet. The BitCoin protocol stack, available as open source software, can be run on a wide range of computing devices, including laptops and smartphones, making the technology easily accessible.

Sounds a bit too technical, doesn’t it!!!

Let’s break down how it works with a typical world example first and then we can compare and list BitCoins features.

Let Alice be a customer who has a BitCoin wallet and is now ready to receive funds. Once she signs up for a BitCoin account, her wallet application will randomly generate a private key together with its corresponding BitCoin address. Her BitCoin address is simply a number that corresponds to a key that she can use to control access to the funds. There is no account or association between that address and an account. Until the moment this address is referenced as the recipient of value in a transaction posted on the BitCoin ledger (the blockchain), it is simply part of the vast number of possible addresses that are “valid” in BitCoin. Once it has been associated with a transaction, it becomes part of the known addresses in the network and Alice can check its balance on the public ledger(explained later).

Let’s say Alice owns a coffee shop and a customer, say Harry chooses to pay for dinner using BitCoins. Alice will have a printout of her address or QR code as displayed in her BitCoin wallet displayed in her shop for customers to be able to send BitCoins. There is nothing sensitive, from a security perspective, about the bitcoin address.

Let’s consider the cost for dinner to be 0.10 bitcoin, also known as 100 millibits. To transfer the bitcoins to Alice account, if Harry is using the Blockchain mobile wallet on an Android phone, he would see a screen requesting two inputs:

In the input field for the bitcoin address, there is a small icon that looks like a QR code. This allows Harry to scan the barcode with his smartphone camera so that he doesn’t have to type in Alice’s bitcoin address ( like example: 1Cdid9KFAaatwczBwBttQcwXYCpvK8h7FK ), which is quite long and difficult to type. The mobile wallet application fills in the bitcoin address scanning the QR Code and Harry can check that it scanned correctly by comparing a few digits from the address with the address printed by Alice. 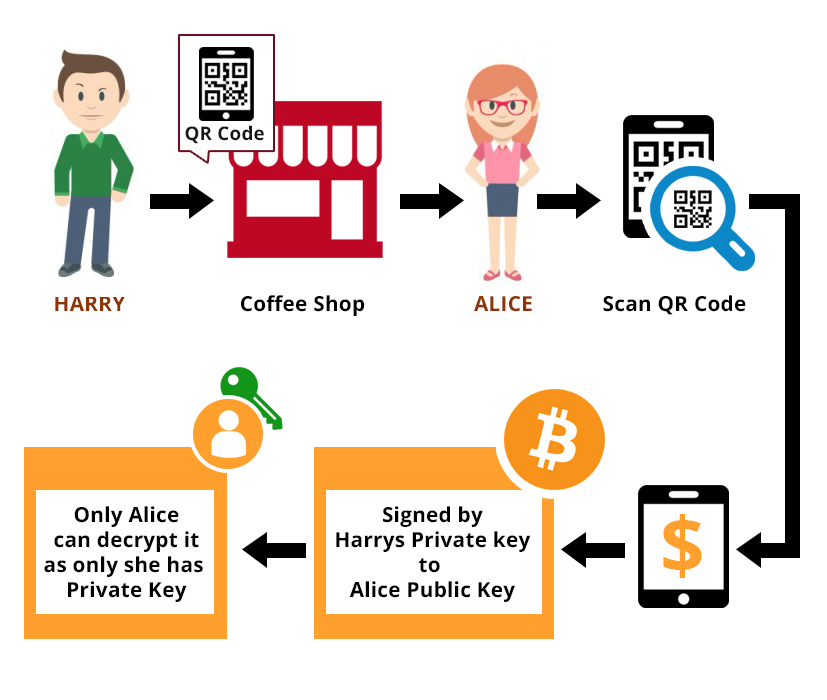 The bitcoin ledger is a constantly growing file that records every bitcoin transaction that has ever occurred—is public, meaning that all she has to do is look up her own address and see if any funds have been sent to it. She can do this quite easily at the blockchain.info website by entering her address in the search box. The website will show her a page listing all the transactions to and from that address. If Alice is watching that page, it will update to show a new transaction transferring 0.10 bitcoin to her balance soon after Harry hits Send. 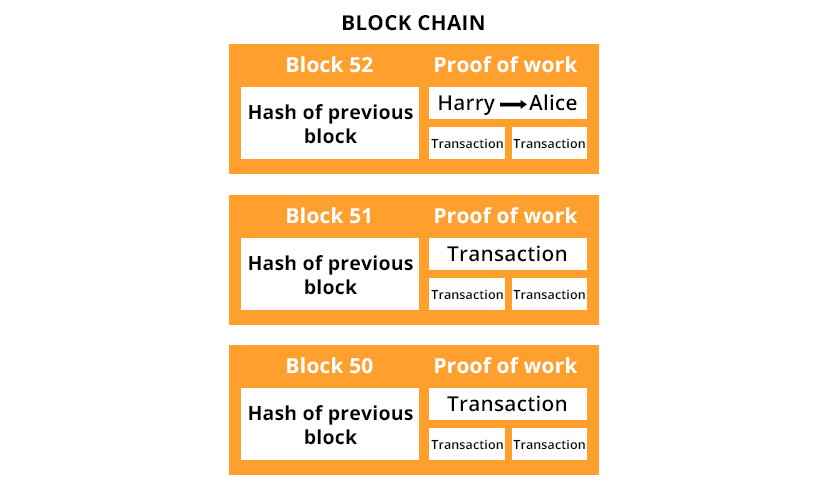 Similarly, she can buy something now using the bitcoins she has now and the bitcoin gets transferred to the shop owners wallet following the steps as above and so on.

Thats what happens in the frontend. Keeping this example in mind, let’s now look behind the scenes at how BitCoin Works.

Bitcoin – Behind the scenes

Putting it simply, the bitcoin system, unlike traditional banking and payment systems, is based on de-centralized trust. Instead of a central trusted authority, in bitcoin, trust is achieved as an emergent property from the interactions of different participants in the bitcoin system.

We will examine bitcoin from a high level by tracking a single transaction through the bitcoin system and watch as it becomes “trusted” and accepted by the bitcoin mechanism of distributed consensus and is finally recorded on the block‐ chain, the distributed ledger of all transactions. Each example is based on an actual transaction made on the bitcoin network, simulating the interactions between the users (Harry, Alice, and Bob) by sending funds from one wallet to another.

Now, a question you might not be doubting. Will the input sum equal to the output? Not always, No. Instead, outputs add up to slightly less than inputs and the difference represents an implied “transaction fee,” which is a small payment collected by the miner who includes the transaction in the ledger.

What does the transaction contain?

The transaction contains proof of ownership for each amount of bitcoin (inputs) whose value is transferred, in the form of a digital signature from the owner, which can be independently validated by anyone. In bitcoin terms, “spending” is signing a transaction that transfers value from a previous transaction over to a new owner identified by a bitcoin address.

How are bitcoins generated?

Well, they are generated by a process called mining and people who mine Bitcoins are called miners. We can look into that in more detail in the next part of the blog. To make the process simple, let’s consider Harry as a miner ( you remember him right, the dinner guy 😉 ). Continue reading here

Web enthusiast and tech savvy, curious to solve and find solutions to seemingly difficult tasks. Currently working as System Engineer at SupportSages and although his skill set is vast, his greatest expertise revolve in the worlds of system administration.

Chapter 6 Getting help in Linux!