How to add swap space on live server

One of my client experienced frequent MySQL downtime on his server. The VPS server had  a couple of accounts with relatively normal traffic. The MySQL error log and server load during the MySQL crash too failed to show up any unusual events.

On further investigation, the server log /var/log/messages, indicated that the server had been suffering from resource scarcity and hence OutOfMemory (OOM) killer was triggered at multiple occassions.  The time of MySQL crash was in perfect synchronization with the OOM killer entries in the server logs and which made me to suspect a link between the two.

Below is the screen shot of the error message we received

As you can see from the above screen shot the MySQL process 11079 had been killed due to Out Of Memory issues.

As usual I had checked the available primary memory for the VPS and the output showed nearly zero/low free memory availability.

Strikingly, there were no swap partition enabled for the server and the client was not in a position to increase the RAM allocation.  So to improve the server performance a swapping system is the only available choice and hence I had decided to move forward with setting up a new swap partition for the server. Moving the inactive process to swap space, even when sufficient RAM is available,  will help the physical RAM to spend its penny available memory to some other process.

A swap file is file on the HDD which acts as temporary storage location for the less frequently used memory pages from your primary memory. New  Linux kernels support swap files to a great extend and swap files are now just as fast as swap partition. Hence I decided to proceed with creation of a swap file to  add swap space on the live server.

Before that, I would like to make you familiarize with the below commands.

===
swapon & swapoff – The commands which is used to enable and disable the swap files.
fallocate – The command utility which helps to preallocate the space to a file.
mkswap – The command used to create a swap area on the device
===

How to Add Swap space?

Before creating a swap file, check the disk usage in the server.

This is an important check as the size of swap is usually double the size of RAM. Here the RAM size is approx. 1G and the proposed swap file size is 2 GB, so it is essential that the space is available. Here the free space is much more beyond the required space and hence we can proceed with add swap space.

1. Use fallocate command to preallocate space to the swapfile.

3. Change the permission of /swapfile to 600 so as to allow only the root user to read and make changes to the file.

4. Use mkswap command to instruct the server to designate and mark the file “/swapfile” to be used for swapping

5.After the successful creation, we have to enable the swap file using the command swapon to take effect.

6. To mount the swap partition permanently, add the swap information in the /etc/fstab

6. Finally we need to confirm whether swapping actually happens or not

If you get the result of swapon -s in the terminal then the swap space is successfully configured in the server.

7. Then, run the free or vmstat command to check the usage of swap memory in the server.

Hope, this article helps you. Thanks for your time 🙂 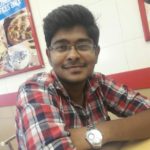 System Engineer with two years of experience in deploying and managing hundreds of Linux servers. Currently working in Cloud technologies, especially with AWS platform. His work includes installing application server, scaling and configuring it for high availability and fault tolerance.