Tags: benchmark comparison of firefox 3.0 and firefox 3.5 in linuxbrowser warfirefox 3.5

I am a hard core fan and promoter of Ubuntu Linux in Desktop OSes. But when the most important application in this internet era, gets buggy, sloppy, sluggish, even I start thinking about SeaMonkey or Opera as my browser. Opera is out of option in Linux atleast. But SeaMonkey was truly under my consideration until I decided to try Firefox 3.5.

Firefox 2 versions crashed very often & Firefox 3, took 60% of the system memory and much CPU as well. A straight leap from version naming from 3.1 to 3.5 itself had something to say and I heard what it said 🙂

But I would say thanks to Google. I wonder if Google hadn’t released Chrome, Firefox developers wouldn’t have ever felt a challenge. They foresaw the chances of Chrome winning over Firefox in Linux too, once it gets released for Linux Platform. Being open source, I believe Chrome can improve and release a faster browser, faster than Firefox 3.5. Still see lots of room for improvement in Firefox 3.5. But my tests says it is faster than firefox 3.0.9 by approximately 200%. I tested with 24 browser tabs opened in Firefox 3.5 and 1 browser window with firefox 3.0.9

See the screenshot of the performance measured using http://www2.webkit.org/perf/sunspider-0.9/sunspider.html 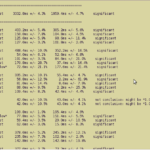 Maddy has been with the industry for the last 12 years and is an Account Manager for few of our customers. He loves to optimize the webserver, database and is interested in setting up high performance clusters.