SysAdmin Series – What does ksoftirqd do ?

Operating System manages and controls I/O operations and I/O devices. Let’s have a quick overview of different ways of interacting with I/O devices, before we go through what a ksoftirqd does.

Interrupts – The CPU issues commands to the I/O module then proceeds with its normal work until interrupted by I/O device on completion of its work.

Polling – OS simply checks from time to time if a device has completed a request.

There is DMA + Interrupts as well as DMA + polling as well.

Now let’s consider the interrupts way of interacting with the I/O. Interrupts from the hardware are known as “top-half” interrupts. Interrupts are best explained with network traffic.

When a NIC receives incoming data, it copies the data into kernel buffers using DMA. The NIC notifies the kernel of this data by raising a hard interrupt. These interrupts are processed by interrupt handlers which do minimal work, as they have already interrupted another task and cannot be interrupted themselves.

Hard interrupts can be expensive in terms of CPU usage, especially when holding kernel locks. The hard interrupt handler then leaves the majority of packet reception to a software interrupt, or SoftIRQ, a process which can be scheduled more fairly.

In some situations, IRQs come very very fast one after the other and the operating system cannot finish servicing one before another one arrives. One of the mechanisms of deferring the tasks is by implementing a queuing system, called ksoftirqd. ksoftirqd, is utilized when the machine is under heavy soft interrupt load.

If ksoftirqd is taking more than a certain percentage of CPU time, this indicates the machine is under heavy interrupt load and not eating CPU. If there is a bug in a driver or any other issue, you can see that one CPU is taking too much load while others are underutilized.

You can tweak the settings a bit, by defining which CPU picks up a certain
interrupt. You do this by changing the contents of /proc/irq/$interrupt_number/smp_affinity. You can get a list of interrupts and their meaning by doing: 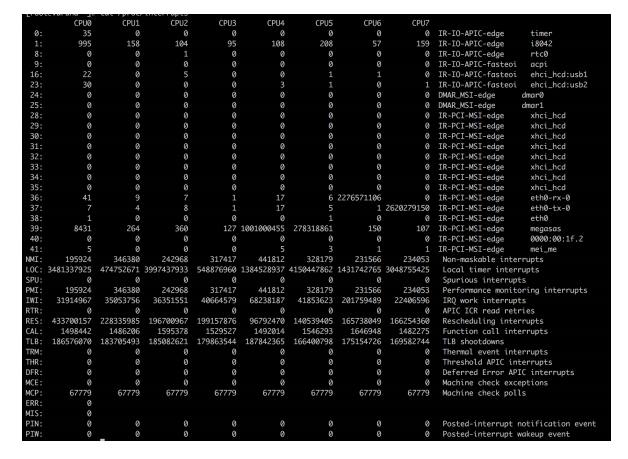 The number in smp_affinity is a bitmap of CPUs, represented in hex code. The rightmost bit is the least significant. For instance, if the system has 8 cores and you only wanted to use cores 0, 1 and 3, you should set the smp_affinity to