All you want to know about Asterisk – VoIP Fundamentals – Part 1

The analog telephone that we use in our home has mainly three parts.

SPEAKER – The speaker is located in the handset. It is the device that makes us hear voice in a telephone. It is the receiver part of the voice transmitted.

MICROPHONE – This is the transmitter part of our voice over a telephone. When a person speak, sound waves are created. The Microphone senses these sound waves and convert them to electric signals with the help of a carbon granules.  These voice current signals are then transmitted over copper lines over to the person on the other end.

The telephone is connected to a wall jack in our homes. The wall jack has wires that extends upto a telephone exchange. 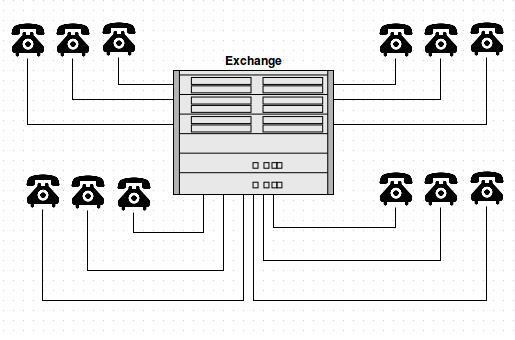 This telephone system is also called a PSTN (Public Switched Telephone Network) The entire network that connect all the telephones in the world with the telephone exchange is called a telephone network.

As we see, for this type of POTS/PSTN communication a dedicated line is formed (provided by the PSTN provider) from the caller to the called party for the entire time of call. So each user of a POTS system has physical wired connection from them to the other end. This consumes a lot of money for the telephone company as they need to extend wires wherever there is a user. During the entire call duration, a fixed line circuit is established dedicated for the caller and called party.

Since the communication is analog, the quality of service is poor. This is because the regeneration of an analog signals is difficult. Even though we use devices such as amplifiers to compensate the transmission loss, the lost signal cannot be regenerated to its 100 percent. This is the case with POTS system, but with the PSTN(digital telephone exchanges) this drawback has been taken care of. So this is how our conventional telephone work.

Nowadays almost all the conventional systems are getting replaced by digital or computerized systems. This was because of the growing and ever expanding features of Internet. With Internet, people can connect each other by having a device that supports Internet. But till early days, Internet was used to send and receive only data packets. ie; people can communicate over internet using IP packets. These data packets can be sent from one computer to another using cables (LAN) or without cables (WLAN). For wireless data transfer we need special devices called wireless routers.

Since the Internet industry has grown to a much higher level almost all the services that we see in our daily lives uses Internet- from the easy mobile recharge to the banking sector. So the latest advancement in telecommunication system is using Internet to send and receive Voice. This process of sending and receiving voice packets using Internet protocol is referred to as VoIP (Voice Over Internet Protocol). Internet Protocol is a common set of rules that internet based packets need to follow.

Also, additional devices are needed for establishing a VoIP communication. For example, the telephones that we have at our home are designed for analog communication. But Internet is based on advanced digital communication. So this clearly states that we cannot use our conventional telephone to make a VoIP call that works based on Internet.

In order to make VoIP call we must have a telephone that supports digital communication. Such telephones are called IP phones. IP phones are designed to work with Internet Protocol.  Or, if we want to use the analog phone for VoIP communication, a special device known as ATA (Analog Telephone Adapter) is required. ATA’s convert analog signals from the conventional telephone to digital voice packets to be used over Internet.

This is how a VoIP call works: A user initiates the communication using an IP phone or a soft phone (phones available as softwares to be installed onto a computer). The voice is sensed by microphone and gets converted to data packets. These converted data packets are then transmitted along the IP network to the destination Phone (packet-switching).  At the destination these voice/data packets are reconverted to actual voice and heard using the speaker inside the IP phone.

The entire voice signal is broken down to a number of  data  packets and these packets are sent through different channels available in the network. The receiver then rearranges the packets to the original order and converts it back to the voice signal.

We get a lot of soft phones that can be installed to a computer and it actually behaves like a physical IP phone. If there are two computers with soft phones installed, they can easily communicate with each other using VoIP service.

As mentioned earlier, IP phones are made dedicatedly to work with VoIP. You can make calls using Internet between IP phones.

ATA’s allow us to integrate VoIP with conventional  telephone system(PSTN). It makes the analog phone as an IP phone to be used with VoIP.

Till this is a general working of a VoIP system.

The next part of this blog deals with the detailed working of a VoIP system. There are lots of OpenSource and other licensed VoIP applications/servers available to choose from. I’m using Asterisk to build my communication server.