As I have mentioned in the PART III of this article, all the NS in the Internet will be aware of the IP of root servers. This information is provided in a file which comes along with the name server software package. The file is named.root or named.ca (it varies). This file is called the Root Hint file. It holds the name of the root servers and the corresponding IP at which it should be contacted. The root hint file is usually located in /var/named as named.ca or named.root (if the NS package is BIND). I have attached below a screen shot of a part of the file. 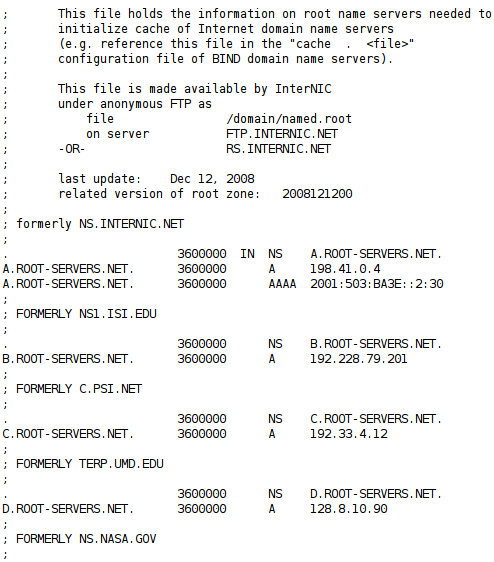 Here you may see the name of the root server to the left hand side and its IP to it’s right. The list I have put here has the severs up to D only. This list continues till M ( M.ROOT-SERVERS.NET.) .

The IP of these root servers do not change frequently but it does, once in while. Thus no one cares to update this file. So it is advisable to update this file for anyone running a busy NS. You can easily fetch root hint file with a dig utility:

You can easily set-up a crontab entry to perform file update once in month.

What makes Root Servers so special than other servers?

The key file that makes root servers so special is ‘root.zone’. This is contained in all the root severs from A – M. You can download this file too and view it ! Just note the screen shot in the above page. Two ftp servers are mentioned in the top : FTP.INTERNIC.NET & RS.INTERNIC.NET . Just do an ‘anonymous’ ftp to the above server and get the file by navigating to the specified directory. I have attached a screen shot of a part of it below. 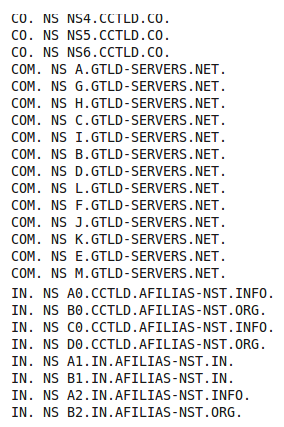 Now you might wonder: Only the names of the authoritative servers are mentioned here and where to get the IP of these? You need not worry. The IPs are mentioned in the same file after listing NS for all the TLDs. To make things clear I have put a screen print below:

The above is an entry in the same file ( root.zone). A.GTLD-SERVERS.NET. is an Authoritative NS for .com TLD. It’s IPv4 and Ipv6 addresses are mentioned. Similarly, there will be an IP entry for all the all the authoritative name servers for all the TLDs.

Please Note: I recommend the reader to compare the above informations with PART III of this article. It will help in clear understanding.

Okay. Then who updates this root.zone file?

In 2004, ICANN took over responsibility for the maintenance of the root- servers TLD master file—the file that lists the authoritative servers for each TLD. Distribution of this file to each of the operational root-servers is carried out using secure transactions. To further increase the security, the server providing the root updates is only accessible from the operational root-servers. It is not a publicly visible server.

Technology always fascinated me and continues to do so. I started my career back in 2004 as a Junior System Admin and worked in various capacities both in technical and managerial roles. I love to experiment and try out new OSS projects and in free time, go for cycling to the interiors of God's own country, Kerala!