We had discussed about various cloud categories and the fundamentals of OpenStack in my previous post. Here I am trying to help you to configure and fulfill the basic prerequisites for implementation of cloud using OpenStack on Ubuntu 14.04 LTS servers.  Please make sure to use the corresponding configuration files in accordance with your distribution. 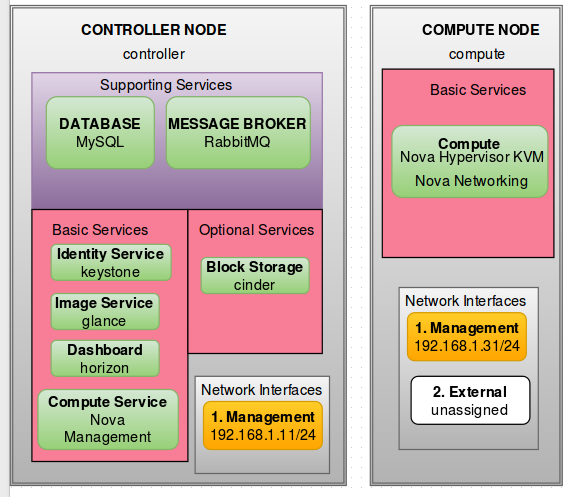 Network: Set the eth0 interface as the management network.

Edit /etc/network/interfaces file with the entries shown below:

Name Resolution : Set the hostname of the node to “controller”

Edit the /etc/hosts file with the following entries

Network: Set the eth0 interface on the management network.

Edit /etc/network/interfaces file with the entries shown below:

Set the eth1 interface to be used as the external interface.

Edit the /etc/network/interfaces file to contain the following

Here we don’t set any IP address to the eth1 interface. Its manually assigned by the network script.

Name Resolution : Set the hostname of the node to “compute”

Edit the /etc/hosts file with the following entries

Once this basic network configurations are done, verify the connectivity between the controller and compute nodes using ping (ping with both IP address and the hostnames ).

On the compute node, Edit /etc/ntp.conf and set the server directive to use the controller node as the ntp server. Restart ntpd service for the changes to take effect.

Edit the [mysqld] section in /etc/my.cnf file to add some additional configuration as shown below for MySQL to work with OpenStack

Delete the anonymous users that are created when the database is first started by the following command.

This command presents a number of options for you to secure your database installation. Respond yes to all prompts.

All the other nodes except the controller node in the OpenStack architecture should have MySQL Python library installed. You can install it by the following command.

This tutorial uses RabbitMQ as the message broker. Installation steps are shown below.

We use the same guest user here, but reset the password to a new one for ensuring security with the following command.

Now we have done all the basic configurations so that we can proceed to install the basic OpenStack services.